How Do You Handle Conflict In The Workplace 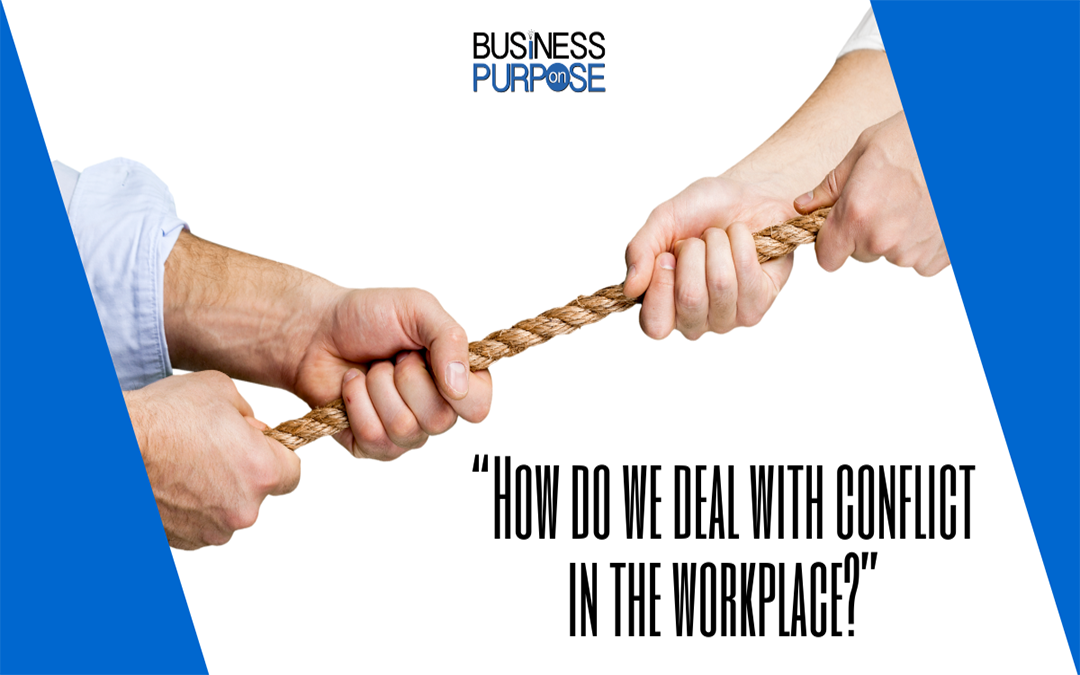 Let me paint a picture for you…you walk into work, look to your left and the admin won’t lock eyes with you. You walk into the break room to grab a donut, no one’s talking in there. You sit down at the team meeting and it’s quiet as everyone is looking at their phones. What happened to our team? We used to laugh a ton and all get along, but for some reason, we can’t seem to move past all of this conflict.

Does that scenario sound familiar at all? Ok, maybe it’s a bit dramatic. Maybe everyone’s not avoiding each other’s stares. But, I don’t think I’m that far off. Are there situations that are off-limits to talk about? Maybe jokes that are a bit too close to home and when they’re made everyone kind of awkwardly laughs?

Maybe there’s that suggestion at the meeting for the boss and you start to see some steam leaking out of one of his ears? I don’t know what it looks like in your business, but I know one of the constants in every business is conflict!

So how do we typically deal with conflict if, and when, it comes up?

Most people do one of 3 things…ignore it, take it on too directly and run over everyone in their path, or take it on just enough to make it go away in the moment, but never fully deal with it.

I’ve actually seen this with multiple businesses I’ve worked with recently. There’s always that one person the owner says, “Oh, well I can’t say that to them.” My response is always, “Why not?”

We go back and forth for a bit, but it almost always comes back to the conflict that was ignored and never dealt with. It’s created this “No Fly Zone” that everyone steers clear of and has to walk on eggshells around.

Or maybe you take it on too aggressively. Maybe you, as boss or supervisor, shut it down immediately, raise your voice and humiliate the person in front of the team. Proving you’re the alpha and they are not, But what did you do in that situation? You lost all chance of them ever wanting to follow your leadership willingly. You bred discontentment and resentment in the workspace and a culture of shame. That’s NOT what we’re going for.

You see, when conflict happens, and it inevitably does…most of us react. We move past it or move in too quickly. We have a knee-jerk reaction based in emotion that we normally regret later on and realize that it was in no way productive for our team or our business. Instead (React or Respond), we should focus on responding. Surveying the issue at hand in the conflict, analyzing the best response, keeping emotion at bay, and dealing with it in a level-headed manner.

This React vs Respond battle is waging a war in our country right now. Typically something happens and everyone jumps on one side or the other of an issue before taking any facts into consideration. They React…and whoever shouts the loudest gets heard.

What our business needs is time spent responding. Thoughtfully, to whatever happens.

There’s a great verse in the Book of James in the Bible. It says this…” Everyone should be quick to listen, slow to speak, and slow to become angry.”

“Everyone should be quick to listen, slow to speak, and slow to become angry.” Now, I don’t know about you, but how many of you, if someone asked your friends or coworkers about you, think that those words would be used to describe you? I’d wager not many of us.

No, so often we’re the exact opposite. We’re caught in this Reaction mode of never truly listening because we’re too busy thinking about our rebuttal or thinking about how we’re going to respond. So we never hear the other sides thoughts to be able to empathize.

Slow to speak? Come on Thomas I have things to say! I’m the boss, I’ve earned the right. Well, yes that’s partly true. You’ve earned the right to respond in a healthy way that builds your team up. Not to just berate and belittle out of emotion.

Quick to listen, slow to speak, and slow to become angry. Man, I can’t help but think that if we adopted those words right there, our businesses would culturally change almost overnight.

Now, here’s something I get really often…especially with the popularity rising of things like the Enneagram or the DISC profile tests.

Look, being an 8 on the Enneagram or a D on the disc does not give you permission to be a jerk. It just doesn’t. Learn some self-control and watch your employees and coworkers respect for you grow. When they know you could blow up, but you choose to respond, man that’s next-level leadership.

Well, being a peacemaker doesn’t mean you can shy away from leadership. It means that for the betterment of your team, sometimes you have to respond and have hard conversations and not just internalize it. It’s what your team needs.

So, where is conflict crippling your team? Are you ignoring it and pretending it’s not there? Are you going over the top and steamrolling everyone? Or maybe doing just enough to sweep it under the rug and hope it goes away on its own?

That’s no way to lead. Are you someone who Reacts? Or someone who takes their time, surveys the facts, and responds in a way that leads your team towards a healthy conflict resolution?

I know conflict is coming. Choose to Respond the right way and I promise you the culture will change for the positive and the workplace will be an enjoyable place to come every day.

Hey, thanks for listening! I hope you’ll take a minute to subscribe to our Youtube channel and Podcast. We have 4 coaches adding content to that every week now, so enjoy!