What you allow in your presence IS your standard 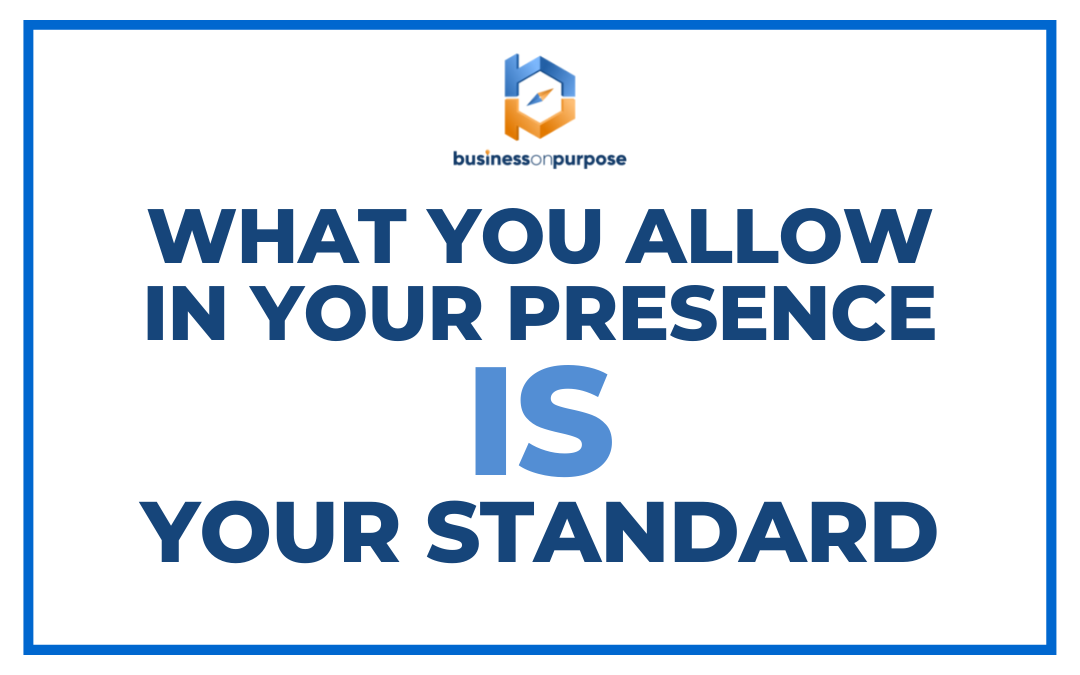 What little things do you allow in your presence that affect the culture of your business? Do they even matter? Absolutely! Let’s dive in and talk about that stuff today. Good morning, Thomas Joyner with Business on Purpose here, and I am so glad you tuned in today.

I was sitting with business owners all of last week talking through each of their employees and the little nit-picky things that frustrated them. One went off on the owner in front of the entire team…literally got in his face and yelled at him for 2-3 minutes. Another, was caught taking a nap in the back room while on the clock. Even another, had been caught saying that she fully finished an assignment and was caught in a lie.

Any of this stuff sound familiar? Of course, it does! It’s the little things that, in the moment, you push aside because there are bigger fires to put out in other areas of your business.

But what happens when you push these things aside and never deal with them? Never expose the behavior or have a conversation setting further expectations? Well, those behaviors become accepted and they slowly, but surely become engrained in the culture.

A good friend of mine had noticed some troubling behaviors from the leadership in his business. There were some small things that began to add up, but since he was on commission in his business, he thought…well, I won’t rock the boat. It’s none of my business!

If you're looking for more resources to work ON your business, we have them.

So, what are the little things that get swept aside as you think, “Oh, it’s not that big of a deal?” Are there little shortcuts your employees take instead of fully finishing a job? Do they fudge on time cards as they think they will just round up a few minutes to get the full hour of work? Maybe they tell you they finished an assignment, but really just did it halfway and there are mistakes throughout?

What do you do in those instances? I can tell you some of the responses I’ve gotten from clients.

“Well, what if I call them out for it and they leave…I don’t have anyone to replace them right now!” While that may be true, I think most employees, if spoken to with respect and without emotion can handle a little accountability. But this is also the reason for more frequent onboarding and training meetings. When the only time you meet is to come down on an employee that makes this way harder. But if you have a system in place to meet frequently, to praise often, and to handle accountability in a timely fashion, this becomes something that makes you better.

Or another response I get, “It doesn’t matter. Even if I bring it up, they just don’t care and will probably do it again.” My response to that. How do you know? Maybe they’re waiting to see if YOU care enough to call it out. Or care enough about them to sit down and lean in. Here’s what I can guarantee, if it doesn’t get called out it will continue to go on as long as you allow it. Because what you allow in your presence will become the standard for your entire team and that cannot be tolerated.

Or maybe a last response I hear…”I’m just too slammed to get to that today. When things slow down I’ll have that conversation.” Well, guess what, things are NOT going to slow down. And things are probably piling up because your team lacks training and accountability to do it right the first time. The more you push it off, the more these LITTLE things pile up and force you to deal with them down the road. No, deal with it quickly, respectfully, and efficiently. Draw the line in the sand for what your standard is every time you see a deviation.

So stop this right now and ask yourself, “What am I allowing in my presence that is affecting our culture?” What has slowly become the standard that we never intended to?

Write a few thoughts down, schedule a few meetings to address some things, or find a tactful way to do it at your next team meeting.

One of my favorite quotes by Dabo Swinney, head football coach at Clemson, is “Praise in public, criticize in private.” It’s powerful. Brag on your team in front of everyone, but maybe pull them aside to address accountability in private.

Now, there’s always things that need to be addressed on a macro scale, but don’t make the mistake of shaming or humiliating your employees out of an emotional response. No, be calculated, fair and direct, but always in private when speaking to one employee.

Alright, I really challenge you to take the time today to figure this out. To reset your standard. It affects culture and culture affects everything.

Have a great week friends!

Thomas Joyner is a business coach in the Lowcountry of South Carolina specializing in liberating business owners from chaos. He is a weekly contributor to The Business on Purpose podcast and can be found at mybusinessonpurpose.com